Imagine you’re tasked with overseeing an eLearning project. There will be five different interim deliverables provided, each of which must be reviewed two or three times as you cycle through drafts. Furthermore, you aren’t the only reviewer. In fact, there are five of them. All five must review and sign off on each deliverable. That means you’ll need agreement from five stakeholders on two to three drafts each of five different deliverables. In other words, you’ll need to get five people, each with their own thoughts and agendas, to agree on 15 occasions during the project. If you’ve ever tried to get five people to agree on something, then you know why a review process like this can prove so challenging.

Reviewing deliverables may seem like the most innocuous thing. It turns out, though, that the process can be the most challenging part of overseeing an eLearning project and by far the leading cause of project delays and scope increases.

Three signs to look for

Here are three signs that you’re suffering from a painful review process – with potentially dangerous implications for your timeline and budget:

1.  The feedback trickle. Some reviewers are timely, others aren’t, so feedback trickles in sporadically, sometimes days later than expected. In turn, you, the project sponsor, deliver feedback to your vendor a little bit at a time, rather than combining all feedback into one document. Because of that slow flow, the vendor will likely be less-than-efficient in getting through the revisions – since their team will also be juggling other work.

2.  The procrastination game. The project is sailing along until the emodule deliverables become more visual, with graphics and interactivity added. At that point, one of your stakeholders begins making changes to the content – content he should have reviewed much earlier, only he didn’t really pay attention to it then. Now the vendor has to take the project back a step, writing new content and creating new graphics to match.

3.  Too many cooks in the kitchen. Stakeholders from multiple corners of the organization have asked to be part of the review process. It sounds like a fine idea. After all, you want to get it right, and having more eyes on the project may ensure its accuracy. On the flip side, it also increases the odds of a delay. All it takes is for one reviewer to fall behind schedule for the entire project timeline to be impacted.

If any of these signs show themselves during your review process, you can be sure that someone will experience pain. Any of these pitfalls can blow up the project timeline, slow down work on the vendor’s side, decrease the vendor’s ability to faithfully incorporate feedback, or even lead to scope increases – all of which hurts your ability to bring the project in on time and on budget.

Do any of these scenarios sound familiar? Probably. Missteps like these are extremely common. We talk about how to repair your review process in our white paper, “The Training Executive’s eLearning Playbook” -- which you’re welcome to download. (We also cover the other leading causes of project delays and budget busts, along with proven fixes.)

With a few tried-and-true fixes, you’ll have your project coming into the station on time and on budget – exactly as planned. 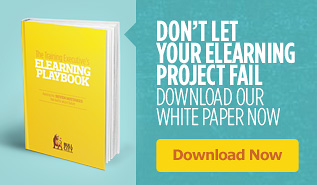